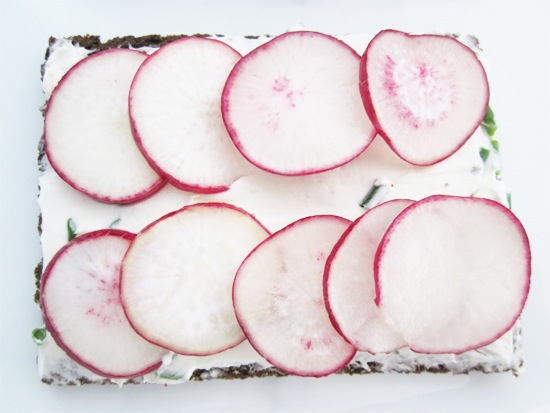 Here’s a simple and healthy meal to try when you’re pining for spring. I thought I might invoke the Brit blood in G by making some tea sandwiches with radishes and herbed cream cheese and Shropshire pea and mint soup. There are other tasty British recipes to try that feature asparagus, leeks, peas* and water cress which are all in season now. 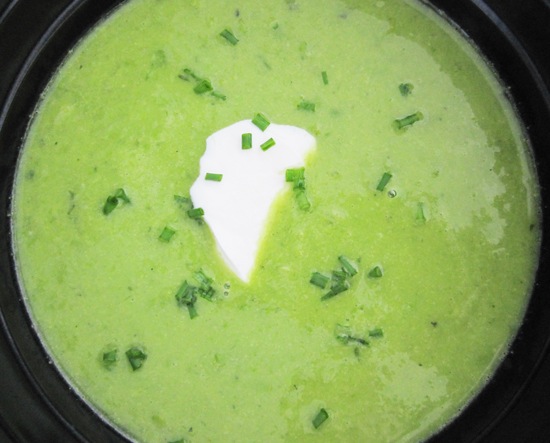 Directions:
Slice radishes and sprinkle with salt.
Toast bread on medium. Cut off crusts if desired.
Fold chives into cream cheese then spread on each slice of toast.
Serve open faced or not, toasted or plain and add watercress or rocket if desired. Enjoy!

Directions:
Melt butter in a med-large pot on med-high heat. Add leeks and onions and cook on low for about 10 mins.
Add stock, peas and seasonings then turn heat up to high. Cook for another 10 mins. Turn off heat then add herbs reserving 1 Tbsp of chives for garnish. Blend soup with an immersion blender or a Chinois strainer. Garnish with a dollop of sour cream and chives then serve.

Here’s a site that has a great selection of British cookbooks.

*Peas were brought to the UK by the Romans but its origins are in Asia. They are known to have been cultivated as far back as 5700 BCE but archaeologists found peas carbon dated at 9750 BCE in caves near the Myanmar/Thailand borders.