NFL: Oh, When the Saints…

G turned me onto football. He's been a Steelers fan for the past twenty years. I've participated in a lot of Superbowl feasts and supportive cheering in the past, but I didn't become a real fan until a couple of years ago. I started following the Saints because I liked their cause. Little did I know that they would eventually rise from their underdog status to be the Superbowl Champs of 2010. The days of being the 'Aints' are certainly behind them.

In week 8, our teams got together for a rare game at the Superdome due to the four-year schedule rotation between conferences. The Steelers are from the AFC north and the Saints are from the NFC south. It was great seeing the last two Superbowl Champs go head to head.

Sundays are not the same without our other guys, the NFL Gameday team: Rich, Mooch, Prime, Michael, Warren and Marshall. We had the privilege of seeing a few of them last year at the Superdome. I think I might have caught Prime's eye when he was priming his lip gloss… We also mustn't forget our female hosts and reporters: Mary, Stacey, Kara, Alex, Lindsay and Michelle. The rest of the NFL Network is great too. 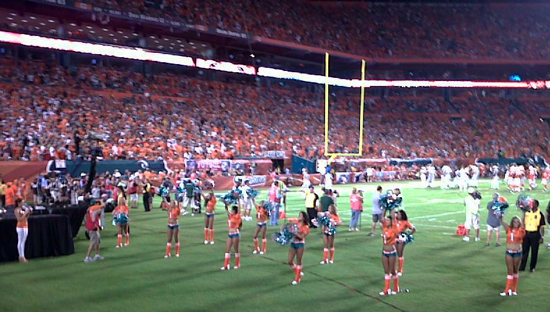 Yesterday, my Saints lost a close game to the Seahawks! I'm disappointed that they won't continue further in the playoffs this year but the Seahawks played well and deserved the win. Seems like the Saints didn't get over their Superbowl hangover after all. G's Steelers secured the second seed in the AFC so they get a 'bye' this weekend then face their division rivals, the Ravens, next week.